More Than A Movie Set

You may already know that Quentin Tarantino’s latest movie, Hateful Eight, is being filmed in Colorado. But what about the ranch it’s being filmed on?

The Schmid family has worked on their land outside of Telluride for more than 130 years. The land was permanently preserved with a conservation easement in 1999 with the help of more than half a million dollars in GOCO funding. So what happens when a Hollywood film crew comes to town? GOCO caught up with Marvin Schmid to see what life after the Hateful Eight is like.

The good news? The 200-person crew have turned into lifelong friends for the Schmids. The (not so) bad news? 200 people make a lot of mud.

“The crew was really nice. I really liked them a lot,” Schmid described. “We had nearly 200 construction people onsite for almost two months. Some of them have come back to visit and we probably gained some long-term friends.”

“They built everything onsite. It was amazing. The buildings were complete inside and out, engineered with plans and everything. They had foundations and everything,” Schmid continued. “The bad thing was 200 people running back and forth in vehicles every day.”

But don’t get worried just yet - the reclamation agreement the Schmids made in partnership with the San Miguel Conservation Fund made sure that land would be reseeded to undo any damage done by filming a movie.

“We got to reclaim the land ourselves. We did all the reseeding and planting ourselves, which is really a good deal. They bought 600 pounds of seed to our specifications, so the reclaiming is all done now,” Schmid said.

"We're guardedly optimistic on our end that everything's going to regrow, but we're not going to know for a couple years," San Miguel Conservation Fund Executive Director Chris Hazen said. "It takes time."

Schmid also described the Hateful 8 crew as willing to “bend over backward” to get along with the community. Someone even bought out the Telluride theater for premiere night – the first 160 moviegoers got their tickets for free.

Schmid has seen the movie, saying it was funny and urging us to go see it before even finishing this blog update, but the real silver lining of the movie?

“The location manager fell in love with my daughter,” Schmid revealed.

The Western film calls for a mountain-top ranch laden with snow, and as Hollywood often enjoys taking a step back in time, the untouched acres of the dynamic Schmid Ranch are exactly what Tarantino was after. But Schmid Ranch, a Colorado Centennial Ranch, is much more than just the ideal movie set for Tarantino. With over 130 years of Colorado heritage embedded in its history, the ranch is a stronghold of Western tradition. Today, the ranch remains a true working ranch, producing hay, organic beef, and goat products, while its more touristy offerings serve as a means to sustain the agricultural side of the ranch.

The ranch was homesteaded in 1882 by the family when the West was still being won. Matriarch Clarice Schmid (pronounced Clair-is) once described mountain ranchers as “rich in land, family, and memories,” a sentiment that still holds true as the fifth generation of Schmids diligently works to preserve their now 900-acre property. Not only does the ranch hold agricultural value, but it is also a major wildlife corridor for elk and mule deer. The ranch’s 900 acres also help preserve the delicate Rocky Mountain alpine ecosystem, which without dedicated efforts to protect open space, would be disappearing just as rapidly as modern day ranchers. 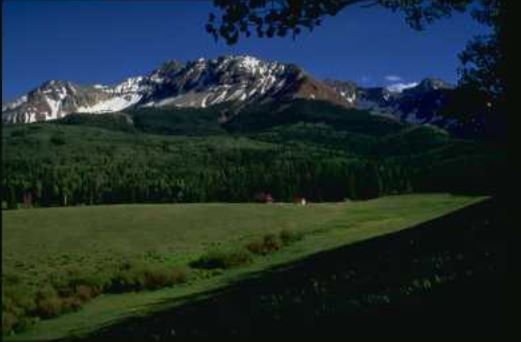 When Orville Schmid, who had owned and managed the ranch, passed away in 1994, the family became resourceful to keep the ranch in operation. A conservation easement would help Orville’s heirs to absorb the estate tax burden they inherited with the ranch, but more importantly, it would allow them to continue to protect and honor the land they had called home for so many years.

In partnership with the San Miguel County Open Space Commission, The Nature Conservancy, and the San Miguel Conservation Fund, the family pursued a conservation easement to permanently protect their land from being developed. GOCO invested over half a million dollars in the project, helping ensure that Schmid Ranch would remain in its pristine condition – forever. The project was the first of its kind in San Miguel County and the Schmid Family’s endeavor to protect their land served as a launch pad for the Open Space Commission’s future conservation efforts.

In the years following the Schmid Family’s easement, the Open Space Commission preserved thousands more acres in San Miguel County. Current owners Marvin, Goldie, and Sydney Schmid are already planning for the future – with 12 parties making up Schmid Family Ranch LLC, the likelihood of the ranch falling into questionable ownership is all but eliminated.

Marvin’s daughter, Amber, is poised to carry on the Schmid ranching legacy, and thanks to the conservation efforts of the Telluride community, San Miguel County, the Schmid Family, and GOCO, the land will continue to be honored just like the original homesteaders would have wanted.